In 1893 at the age of 13, Edward Richards left school to join his father in his small blacksmiths business in Bristol.  Working for other Bristol Companies as well as the general public, manufacturing with steel and iron for bespoke orders of wrought iron gates, and other ornamental items for the building trade.  Their activities prospered and they moved to larger premises in the central Temple district of Bristol.

By the time of the 1914 -1918 War the partnership was well placed to become contractors to HM Government supplying horseshoes, nails and a range of other items including hinges and brackets for the gun carriages and other horse-drawn vehicular items required at that time.

During the 21 years of peace between the wars, the business expanded becoming a specialist manufacturer of builders ironwork.  Taking out many patents for the gutter, brackets and pipe clips they made.  When hostilities commenced again in 1939 the company reverted to their role as suppliers to the War Department, providing components for tanks, bailey bridges, ladders etc.  Limited supplies of ironmongery had to be kept for the shadow factories and airfields that were created on open hilltops in an endeavour to act as decoy cities to confuse the enemy bombing raids.

In 1945 the company expanded rapidly into structural steelwork as well as in the original business for iron and steelwork in the building industry, having a registered design for flue pipes with twin legs, a very new concept.   By the eighties however the building industry peaked and the company decided to move to smaller more modern premises in Yatton when they concentrated on the business in which they had specialised in for over a hundred years;   Gutters, Pipes and brackets for Cast Iron rainwater systems.

Today Tuscan Foundry from its works in Mid Wales, manufacture an extensive range of traditional cast iron products for the conservation and restoration of listed, period and it’s historic buildings with its original trading name of E Richards forming part of our history and passing now into the hands of another family-run business. 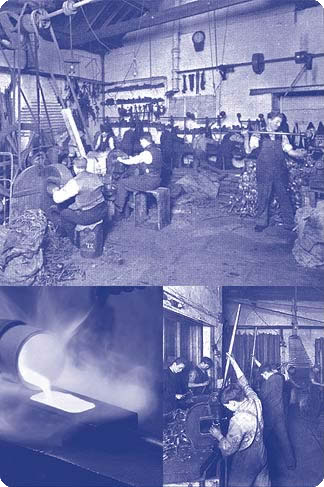